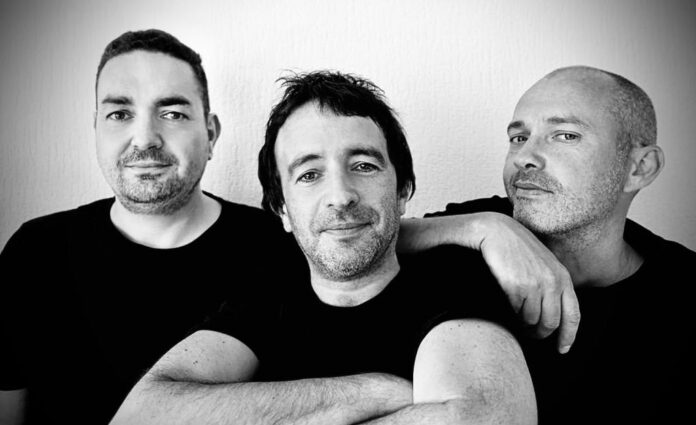 With a combined fifty-plus years experience at the forefront of the French dance music scene, Timid Boy (Damien Almira) and Ohmme (Olivier Giacomotto & David Lecocq) have the productions credentials to match some of the best in the business. Now, off the back of their already formidable individual careers, the three electronic musketeers join forces with long-time friend and esteemed stage designer, Alban Piot, for their foursome’s first collective project and one of the most exciting label launches of 2020 – Sacré Coeur Records. Set up as a platform to champion some of the brightest up-and-coming talents on the French techno circuit – as well as being a home for their own prolific stream of output – Sacré Coeur Records officially launched on Friday with the release of Timid Boy’s three-track EP ‘Ceremony’. We sat down with formidable Frenchmen to find out more…

Hi guys, and a very warm welcome to Techno Mood. Great to have you with us for the first time!
Damien : Hey thanks for the invitation ! Nice to e-meet you !
Olivier : Hi, first time indeed, exciting!!

Please can you introduce yourselves to our Techno Mood readers?
Damien : I am Damien Almira, aka Timid Boy, from Montpellier (south of France) , I live in Paris for a longtime. I also run Time Has Changed Records, produce techno-tech house as Timid Boy (on labels as Saved, Senso, Deeperfect…) and i just start a new project under my name Damien Almira more deep & micro.
Olivier : my name is Olivier Giacomotto, member of the two headed sonic monster called Ohmme with my friend David Lecocq. We both live in Paris. David is known for his long career in the Paris nightlife as venue director and DJ. I am an electronic music producer, also DJ, I worked during 10 years with John Acquaviva as A&R and main artist for his label Definitive Recordings, i am now focused on my own sound as well as Ohmme’s, and we are obviously very excited about this new Sacré Coeur Records project.

Despite everything that’s going on in the world right now, how has 2020 been for you so far?
Damien : Well it’s hard to answer “Despite everything that’s going on in the world right now” as it absolutely affects my life in a way i don’t like, specially i used to travel mostly every week-end to play, and now, mostly no travel, no play… But it gave time to focus on production & to build a new project as our new baby, Sacré Coeur Records, my most exciting & very big project since a long time…
Olivier : Damien is right, as most gigs at venues and festivals around the world are canceled or postponed, the borders we used to cross traveling the world remain closed for us… Music is what we have left right now, so we use that opportunity and take time to work in the studio and produce new music.

With large parts of the world still suffering the effects of COVID-19, and with large-scale events cancelled across the board, what have you been doing to keep yourself busy during this period?
Damien : Well during the confinement in France i did a lot of new music, very a lot, i also took time to read, to slow down, have a more relaxed & slow life…
Olivier : I focused on music, and spent most of my time in the studio. David and myself also discussed a lot about the future and how to prepare it the best way we could.

So let’s get down to it…Congratulations on the launch of your brand new label Sacré Coeur Records! Can you tell us why you decided to set up a label and the concept behind it?
Damien : I am friend with David (Lecocq) since a couple of years. We use to speak & exchange ideas about music. We are friends. That’s a essential point for me. I do project with people i have good feeling, people i trust and i believe in. We also support the same kind of music, between techno, tech house, house… I was thinking about doing a new label for some months. It’s always good to start new stuff, it’s exciting, I continue Time Has Changed besides but it’s like i really wanna do new stuff with a team, i love to work with a team.
David & Olivier (Giacomotto) were also thinking about having a label. The idea to do Sacré Coeur together was born in a dinner in early february. Then Alban, a very close friend of David, joined the project. It’s a perfect team, we all have our own experiences in music. David work in night business since almost 20 years (from famous after hours Kit Kat to executive Director of Concrete club), Olivier is internationally known for his producer/DJ career and his hits on labels such as Definitive, Plus 8, Get Physical, Noir, Yoshitoshi, Suara, myself, as I had a long experience working as music journalist – as Head of Editing for Trax Magazine ; also with my DJ residence in Rex Club, or playing in the world on spots such as Panorama Bar, Watergate, Fuse, Pacha, Gazgolder, D-Edge …
Alban Piot completes the team perfectly. He got a lot of experience touring and managing for Luciano, and as stage designer for some of the best clubs in the world such as Ushuaia Ibiza, also working for festivals such as Polaris, Unum, Magic Music Festival, EMF….

You guys have all had successful individual careers in the music and live events industry. How long have you known each other for and how did you meet?
Olivier : I met David about 5 years ago when during his first music project named Los Paranos, we shared the same passion for music. He’s the one who connected the dots, introducing me to Alban first, then to Damien.

The first EP is a release from you, Damien (Timid Boy). Can you talk to us about the record and what our readers can expect from the release?
Damien : Ceremony is a tribute to my early days in the 90’s rave, with a modern production. I wanted to have Matt Sassari that I have known for a longtime and who is one of the best tech house producers. Ohmme put their touch that I like a lot: raw, efficient, very well and nicely produced, a subtle production for a very strong & heavy remix.
Olivier : Ohmme remix is definitely Deep Tech orientated, it has all the sonic elements that define that genre. I can easily hear that remix playlisted by Marco Carola, Oxia, etc..

What’s your vision for the label over the next 5 years?
Damien : we wanna be the french family for tech house. A bit as Lola & Appolonia did with house, Yoyaku with micro house… France has a lot of very good & famous tech house/groove producers such as Oxia, Popof, Traumer… hopefully we will work with them. The idea is also to make parties & stages in festivals around the world!

And more short term – what’s next for Sacré Coeur in 2020? Any more releases between now and the end of the year you can tell us about?
Damien : Sure, the 2d ep will be by Ohmme, the 3rd by me again. We have some producers on the radar to include in the family, but that’s a bit too early to speak about.
Olivier : David and myself are cooking something hot for that second EP of the label, in the same artistic line of what we produced in the past on labels such as Moan, Deeperfect, Diversion, etc…

Any final words for our Techno Mood readers?
Damien, Olivier, David, Alban : Music will never die. Thanks guys!
Damien : Thanks !
Olivier : It was a pleasure for us all, thank you!